The project is a nightlife exchange involving 14 countries around the world, including the UK. Each will work with a respected nightlife figure to discover the best elements of their country’s nightlife. People can participate through Facebook, by suggesting stuff they think makes their country’s nightlife great. Each country’s expert, the UK’s is Zane Lowe, will then decide what makes it onto the final list, which will then be packed up and exchanged with another global city. The gigs themselves will happen on 27th November (with one in London), with each country exchanging the best of their nightlife with that of another.

The challenge for us was to find ways of representing the collected data in the form of an infographic which would give the viewer an entertaining overview of the opinions of people around the world. It was not possible to make direct comparisons between nightlife in different countries because local trends in different locations vary so greatly. What was possible however, is a graphical visualisation of the most popular opinions of a nation.  Ultimately we identified two infographic techniques to graphically illustrate the thoughts and opinions of large groups of people: 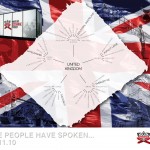 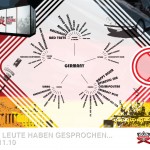 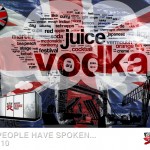 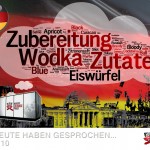 Mind Maps – Diagrams used to represent words and ideas, linked to and arranged around a central key word or idea.  They are commonly used to generate, visualise, structure, and classify ideas.

Word Clouds – Graphical representation of word frequency, which presents a picture of the most common words or phrases that have been used.  Those words and phrases that are most commonly used are displayed more prominently.

For the purpose of this exercise we have created illustrations for the United Kingdom and Germany, Two of the fourteen countries participating in the Smirnoff Nightlife Exchange project.

Visual Evolution is a design collective, formed in 2003.Over the years we’ve built a strong call-off team of specialists in all areas of data and design. A bulging address book, rather than an exhaustive staff list is what helps us develop the infographics we make.Call off specialists include:AnimatorsIllustratorsWeb and UX DesignersDynamic Data Visualisation SpecialistsSocial Media Seeding Specialists