The rather wonderful “Compare the Leagues” website – http://comparetheleagues.com has produced a tool enabling users to compare various statistics for the top 20 European football leagues, as ranked by UEFA. The website is hugely efficient at sorting and displaying the data, but here we have tried to put a bit of beauty back into the numbers.

Categories for comparison, here and on the website include UEFA ranking (UEFA coefficient), European titles won (Champions League, former European Cup, Europa League, former UEFA Cup, former Cup Winners’ Cup) as well as average goals per game in every league, the probability of games ending without goals, as draws / home wins / away wins, a comparison of average football player age across the European leagues, the percentage of players currently playing in a country they weren’t born in, and also various stats about stadium attendances. 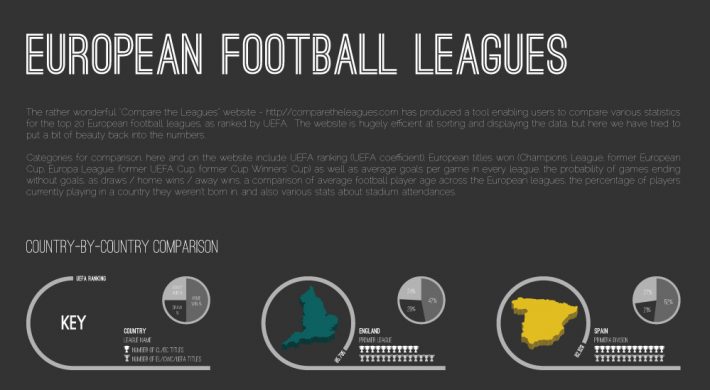